×
Inside CLS
EXPLORE OUR DEPARTMENTS 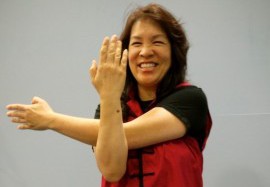 Angela Lee believes in the power of Qi Gong, an ancient Chinese healing art form that originated in the 6th Century AD.

“Honestly, I started as a skeptic,” she said. “Growing up, I was educated in martial arts. My aunt introduced me to Qi Gong and explained the benefits of the simple exercises and how they released healing energy. I thought she was being ripped off so I went to the Qi Gong master to prove to her how silly this was.”

She met with the master and learned the Qi Gong system of postures, exercises, breathing techniques and meditations. “The techniques are designed to improve and enhance the body’s qi, or energy,” she said. “Qi is the fundamental life energy responsible for health and vitality.”

As she practiced, she soon learned how to feel the energy. “The exercises help me relax but at the same time I’m focused and I come away feeling pumped up.”

Angela now teaches Qi Gong at the Millberry Fitness & Recreation Center at Parnassus and to patients at Kaiser. “It’s about preventative wellness,” she said. A large number of retirees take her class at Milberry to keep their bodies strong. Her patients at Kaiser include people with neurological issues, general fatigue, joint pain, cancer survivors, and others. The classes are very social and designed to teach students enough to help themselves. “I’ve had several students in my class for more than 10 years and now they are instructors.”

Angela said the postures relax you and increase life energy to reduce stress, alleviate symptoms of chronic ailments and improve your well-being. It transforms your body from the inside out. It strengthens bones and tendons and tests your lower body stamina.

To prepare the body for Qi Gong or any activity, Angela recommends warming up every day. “You can warm up anywhere,” she said. “While you are waiting for your coffee first thing in the morning you can perform simple stretches that wake up the back, spine and hips. It’s like warming up your car,” she said. “You don’t need a lot of space. It’s as simple as bending over or standing on one leg.”

Angela said the body is made up of circular joints and rotating those joints warms up the soft muscles and tendons. “Think about your hips, shoulders, even your neck, as a circular joint that needs to be rotated and moved. All you need to do is perform some simple circular motions to start your day.”