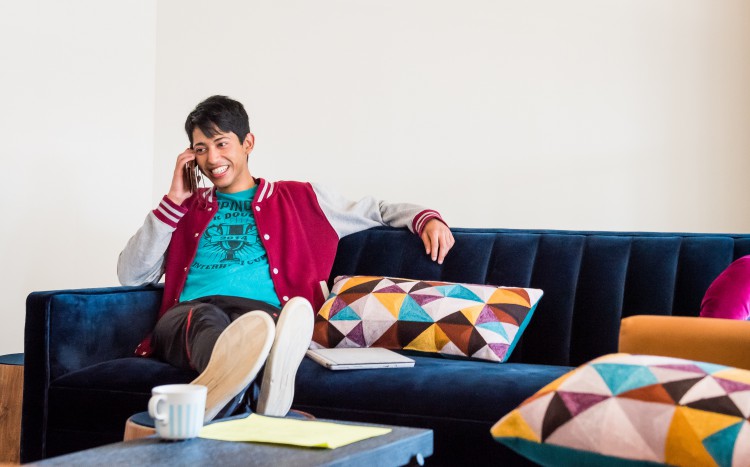 When Nihal Narsipur (photographed above), a pharmacy fellow in Clinical Pharmacology and Medical Communications at UC San Francisco, was looking for a place to live on campus his top priority was location. That’s why he chose the university’s newest housing community, The Tidelands at 590 Minnesota Street.

“I practice as a pharmacist in clinical pharmacology at an ambulatory care clinic in Mission Bay on Mondays and Fridays,” Narsipur said. He also works at Actelion Pharmaceuticals in medical communications in Brisbane, so it’s an easy commute from his new home.

Since moving in, Narsipur has learned why his new San Francisco neighborhood is called the Dogpatch. “I like to jog by the pier in the mornings and the dogs I come across really give me a great start to my day!”

Executive Director of UCSF Housing Services, Leslie Santos said the new building has been buzzing with activity as residents move in and builders finish last minute projects. “It’s a very exciting time,” she said. “We’ve been introducing the new tenants to the neighborhood and they’ve been meeting each other in our community spaces.”

When the second building opens at 600 Minnesota Street later this year, The Tidelands will nearly double UCSF’s inventory of campus housing and rental rates will be 30-40 percent below market. “We know that offering below-market rental units helps ensure the wellbeing of our students and trainees and also assists our schools with their important recruitment efforts, so we are delighted to be opening these two new buildings.”

For Jordan Kleinman, a first-year student in chemistry and chemical biology who is currently rotating in the Fujimori Lab on the Mission Bay Campus, the location of The Tidelands is perfect. “I chose to live here chiefly for proximity to campus and for the opportunity it provided to get to know other students at UCSF. Since it was promoted as giving priority to first- and second-year students, I hoped living here would be a good way of getting to know others in my program and outside of it – and so far, that’s been true!”

Kleinman has used the study rooms to work on summer assignments with other chemistry students and has been going to socials organized by housing services staff. While she hasn’t had a chance to explore the surrounding neighborhood, she does like the location. “I like that the area is quieter than the rest of the city but still within easy walking distance of good food, the campus, and downtown San Francisco.”

Neil Sircar, a postdoctoral scholar at the UCSF Center for Tobacco Control Research & Education, said he enjoys the proximity to bistros and restaurants in the Dogpatch and the fact that he can walk to the Bakar Fitness & Recreation Center at Mission Bay.

“To be fair, I entered the lottery and was assigned The Tidelands. I can’t say it was my first choice because I work at Parnassus and ranked options around there higher, but I liked the peace of mind that being allotted The Tidelands housing provided, especially for my first year. After moving in and getting familiar with the neighborhood and the shuttle times, it is a pretty nice place to live.”

Sircar also grew up in California and has been visiting family in San Francisco for many years. “It felt like a second home,” he said. “Now it just feels like home.”