Generally, the top four teams in each league will be taken to the playoffs. Occasionally, fewer teams will be taken from a small league (four teams or less). Teams must have a 5.5 S.O.G. (Spirit of the Game) rating or higher to qualify for the playoffs (scale of 0-8).

B. A team can start and compete with as few as four (4) players.

C. The game will begin when at least four players are present.

E. A player may only play for one team in each sport. No Exceptions.

F. A team cannot allow another member of another team to play to prevent a forfeit.

G. Participants must present their league card and a valid University of California, San Francisco Student ID, UCSF Employee ID, Fitness & Recreation Membership ID or a Drivers License with Picture ID will be accepted before each contest in order to participate. Picture identification checks occur before every Intramural Sports contest. Failure to provide an acceptable form of identification will result in not being allowed to participate in Intramural Sports on that day. Absolutely no exceptions will be made.

H. All Non-Members and General Public participants must have a valid league card to participate in UCSF Recreational Sports Leagues. League Cards are obtained from the Recreational Program Supervisor during the Captains Meeting. If a league card is lost or misplaced, there is a $5.00 fee to replace the card.

A. If a team does not meet the minimum number of eligible players 5 minutes after the scheduled game time, that team will receive a forfeit.

B. If neither team has the minimum number of eligible players to start or finish a game, both teams shall receive a forfeit.

C. Teams that forfeit a contest without giving at least 48 hours notice to the Recreational Sports office will be charged a forfeit fee. This is to ensure that all teams have an opponent each week.

E. The forfeit fee is $30 per forfeit. Forfeit fees must be paid at the Fitness and Recreation Desk before the team’s next match (usually 7 days) or else they will not be allowed to play their next scheduled match.

F. A third forfeit within the same sport may result in that team being dropped from league play and an additional forfeit fee charged.

B. Length of the game:

C. In the event of a tie during the regular season, the game will stand.

D. In the event of a tie during the playoffs, a tiebreaker will be conducted.

H. Fouls and Misconduct
The following infractions will result in a DIRECT FREE KICK (a one-man wall may be formed).

Should a player of the defending team intentionally commit one of the above 11 offenses within his penalty area (marked by the basketball three-point line) his team shall be penalized with a penalty kick, regardless of the position of the ball, as long as it is in play.

Accumulation of Fouls: A team can accumulate five personal fouls during a half (those accumulated in the second half carry over into over time). On the sixth and following personal fouls (a hand ball is counted): A direct kick, without a wall, will be taken from the top of the three point line if the foul was committed there or farther from the goal. If a foul was committed between the top of the three point line and the goal the team awarded the free kick may choose whether to take it from the 3pt line or from the place where the infringement occurred. Note: A personal foul inside the three-point line is an automatic penalty kick.

If a player has an open goal ahead of him/her and is fouled, or when a defender intentionally handles the ball, blocking an obvious opportunity for a score, a DIRECT FREE KICK is awarded. A penalty kick is taken from the basketball foul line if the foul takes place in the penalty area. The offending player must be sent off the court with a YELLOW CARD. Team will play a player short for two minutes; then a substitute may replace the ejected player.

The following infractions will result in an INDIRECT FREE KICK:

A YELLOW CARD equals two minutes out of play. Double Yellow (a player from each team - both out for two minutes. They, or a substitute may both return after a team scores.)

Two yellow cards equal a RED CARD and the player is ejected from the game. The team must then play one down for the remainder of the game. The player who receives the red card must be cleared by the Rec Sports Supervisor in order to playin remaining season’s games.

POWER PLAY: The team reduced by a penalty may return the penalized (yellow card) player to play after a goal. If two players are in the penalty box from the same team, only the player who has served the longest time may return to action after a goal.

I. Additional Policies
UCSF requires all futsal players to wear shin guards during league play. Any players that does not have shin guards will not be allowed to play in that game.

Visit us for a complimentary workout and get $50 off your enrollment fee when you become a member.

Get started I'm already a member 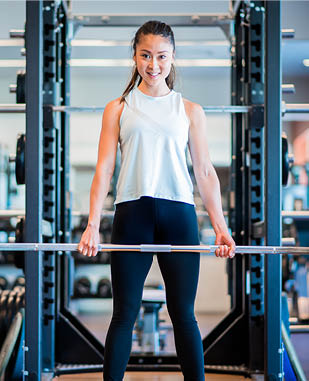