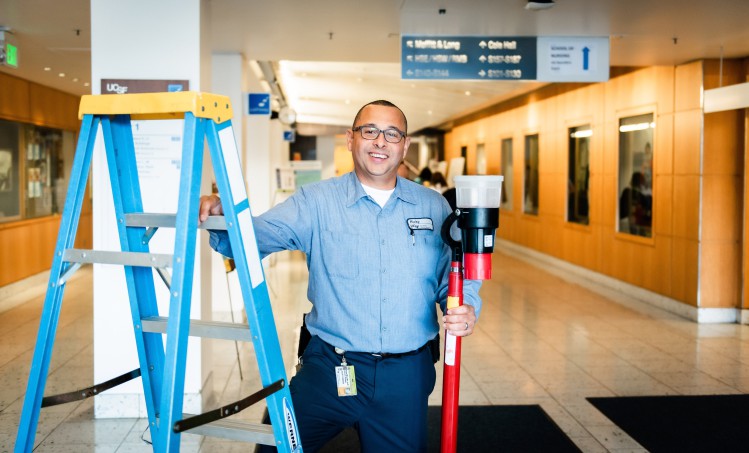 Members of the UC San Francisco community may not notice Ricky Talbott on his daily forays into their buildings, but Talbott’s work is keeping them safe.

“Ricky is very reliable,” said Raj Bhakta, the program manager for Fire Alarm and Life Safety Systems at UCSF Facilities Services. “He is self-sufficient and needs minimum supervision. I also appreciate that he makes himself available when we need him to work weekends to complete an inspection on time.”

Talbott’s work in fire life safety is a far cry from his first job at UCSF. “I started working in Transportation,” he said. “I was working as a valet at Parnassus and then I learned about an opening in Fire Alarm and Life Safety Systems. I’ve been working with the fire alarm group since 2007.”

Talbott was born and raised in Honduras and came to San Francisco in March 1994. His first job was working at the Union 76 gas station at 24th and Noriega Street. “It was a full-service station,” he said. “We would check the oil, tire pressure, everything.”

In 2003, Talbott and his ex-wife bought the station and managed it for several years. He also owned his own business in concrete decoration. “I did that for six years,” he said. “I would put designs on existing concrete walkways. I developed patterns and sprayed them on top of the concrete.”

Talbott said he appreciates that UCSF took the time to teach him the intricacies of building fire systems. “I didn’t know much about fire systems when I began,” he said. “It’s not just fire alarms and sprinklers. There are many devices connected to a larger system and the system communicates with those devices. It’s very complex and interesting.”

Bhakta said Talbott shows how much he cares for the university and loves his work by his actions every day. “He informs me when something requires my attention,” Bhakta said. “That makes my job much easier. He also requires minimal instructions and no supervisory follow-up. It’s amazing to work with Ricky. We need more people like him at UCSF. I’m lucky to have him on my team.”

Outside of his job, Talbott is a big baseball fan. “I have played baseball since I was five-years-old,” he said. “I stopped playing when I moved to Vallejo in 2016.”

Talbott is a big Giants fan and shares his passion for the team with his three kids, ages 17, six-and-a-half, and two-and-a-half. “We love spending time at home in the yard. We love summer, especially after I cut the yard. I love that smell.”

And what advice would Talbott give to prospective fire safety technicians? “Fire alarm systems are so interesting. I enjoy cleaning and repairing the different devices. It’s amazing. I love the position.”