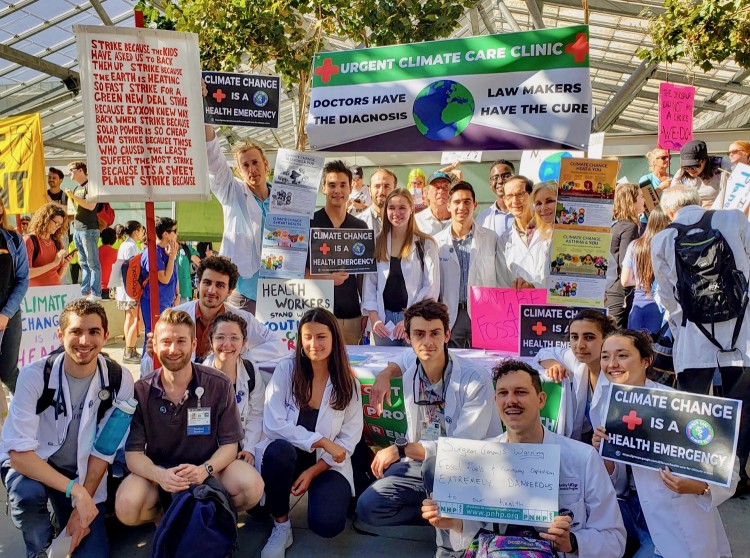 On Friday, Sept. 20, millions of students worldwide went on strike to demand swift action on climate change. Many were inspired by 16-year-old activist Greta Thunberg, who has called out world leaders for their failure to preserve the climate for future generations.

“I felt drawn to strike because of the health consequences of climate change for my patients, future generations, and the people and places I love,” Schear said. “Like the striking youth and the climate scientists of the United Nations Intergovernmental Panel on Climate Change, I am very concerned that humanity is in a critical window of time – prior to 2030 and 2050 – to prevent the worst impacts of climate change.”

Schear noted that the swiftness with which emissions are reduced will determine how severe storms, wildfires, sea level rise, and heat extremes become, according to the United Nations Panel. “How quickly we act will also influence how severe the health impacts will be,” she said. These include an increase in respiratory and cardiac illness, perinatal mortality, malnutrition, displacement and trauma. “Such impacts will hit the most vulnerable, including children, older adults, low-income people, and communities of color the hardest.”

Second year medical student Nuzhat Islam joined the strike because after taking an elective course on climate change and health at UCSF, she has started to realize more and more the physical and mental health and social impacts of climate change on individuals. “I am of Bangladeshi descent and one of the countries impacted by climate change is Bangladesh, in terms of the monsoons and drivers of migration,” she said. “I thought it was important to pursue any avenue to learn about climate change and to advocate.”

Third year UCSF medical student Bennett Kissel, who plans to become a child and adolescent psychiatrist, was motivated to strike because of the passion and urgency of the youth strikers, as well as his knowledge that health care itself contributes to climate change.

“I see health care as this paradox, where every patient that we treat to heal their suffering requires a certain amount of carbon emissions, and that causes a certain amount of violence to this planet and to other creatures on this planet,” he said. “So, the ‘do no harm’ ethos we all believe in—unfortunately this only rings true if we keep our heads in the ground. We have to green this health care sector. That’s our responsibility.”

In addition to marching, the medical students participated in legislative advocacy visits organized by California Climate Health Now. They met with the staff of Speaker Nancy Pelosi, Senators Dianne Feinstein and Kamala Harris (shown below, Schear is center), and Representative Barbara Lee. They requested that climate change be identified as a health emergency and that emissions be cut on pace with the United Nations Intergovernmental Panel on Climate Change guidelines to limit warming to 1.5 degrees Celsius above pre-industrial levels. 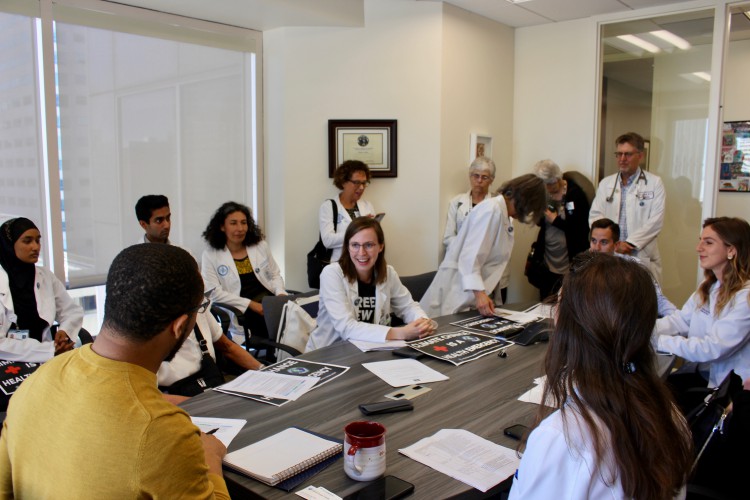 “It was a very new experience for me, advocating and coming into contact with aides of policymakers and officials,” Islam said. “I learned about the structure of these meetings. It was a growing experience. I definitely think it’s a skill a health professional should have.”

Schear said, as future doctors, participating in the strike aligned the students with their core values of preventing harm and health inequities. “We found a sense of community, shared vision, and hope. We learned that medical student voices are essential in this fight, in this critical window of time to drawdown carbon emissions over the next decade.”

Join the Human Health and Climate Change student interest group at UCSF to learn more about climate and health.